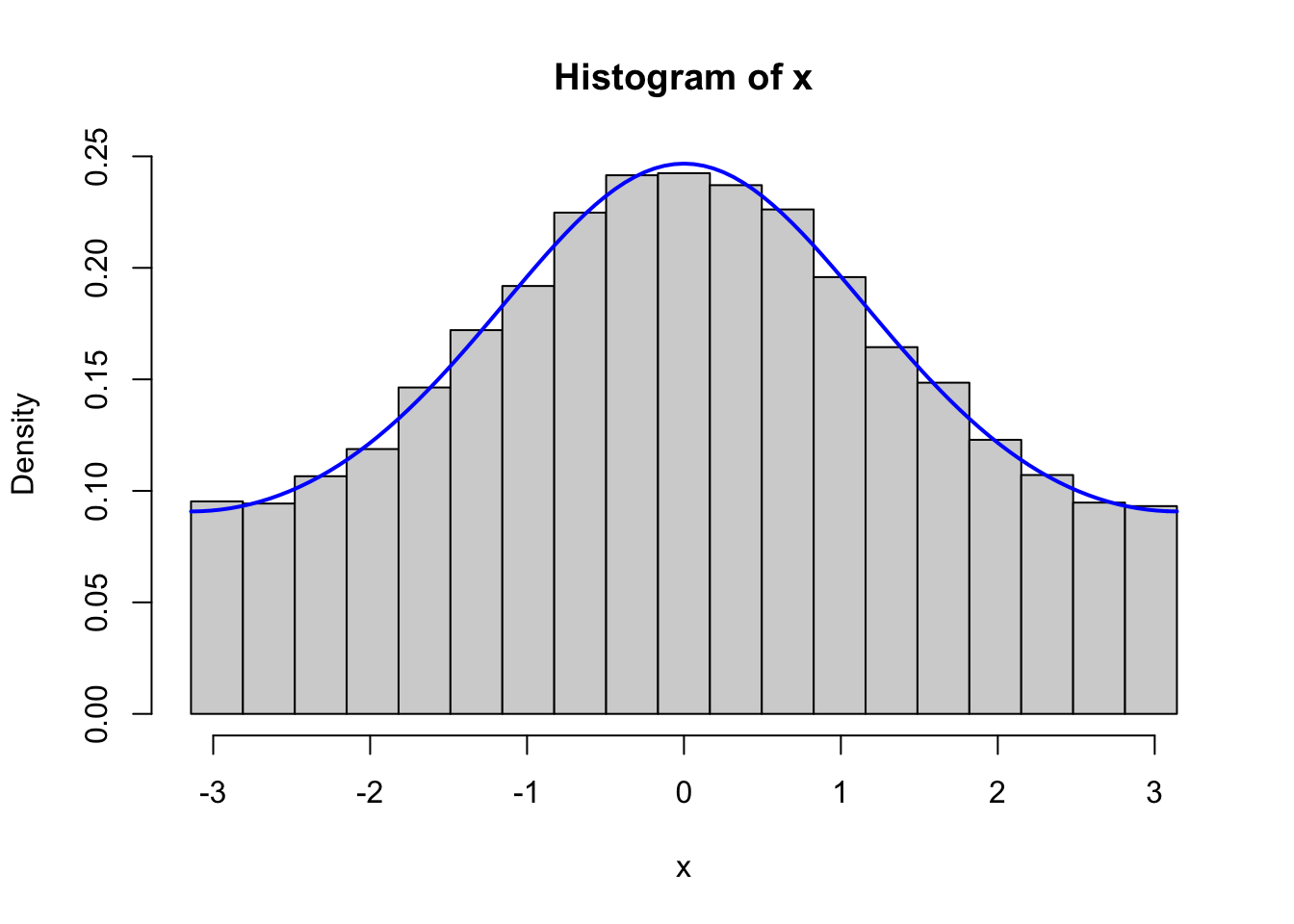 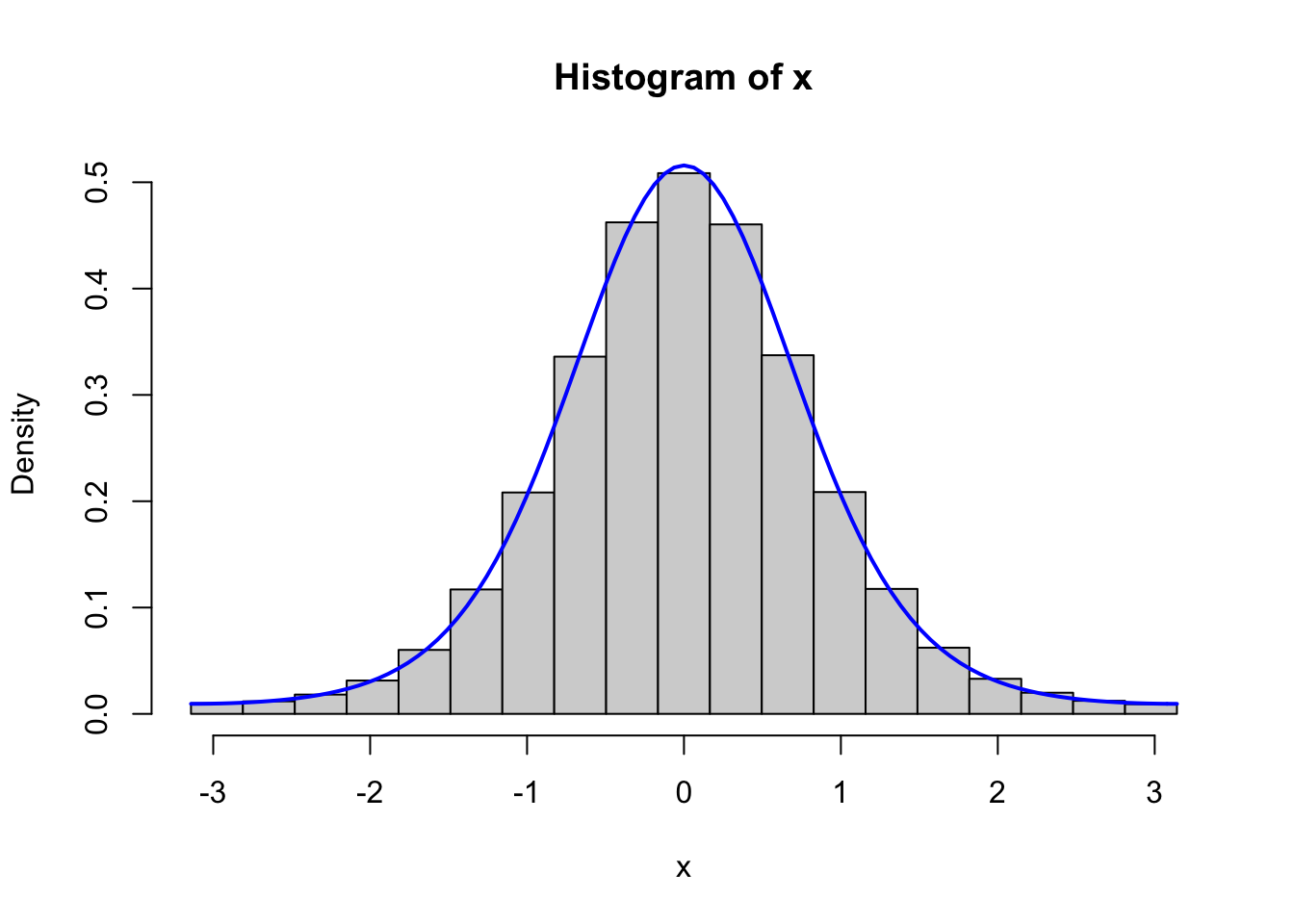 Figure 4.1 confirms that the implementation simulates from the von Mises distribution.

Though the implementation can easily simulate 100,000 variables in a couple of seconds, it might still be possible to improve it. To investigate what most of the run time is spent on we use the line profiling tool as implemented in the profvis package. 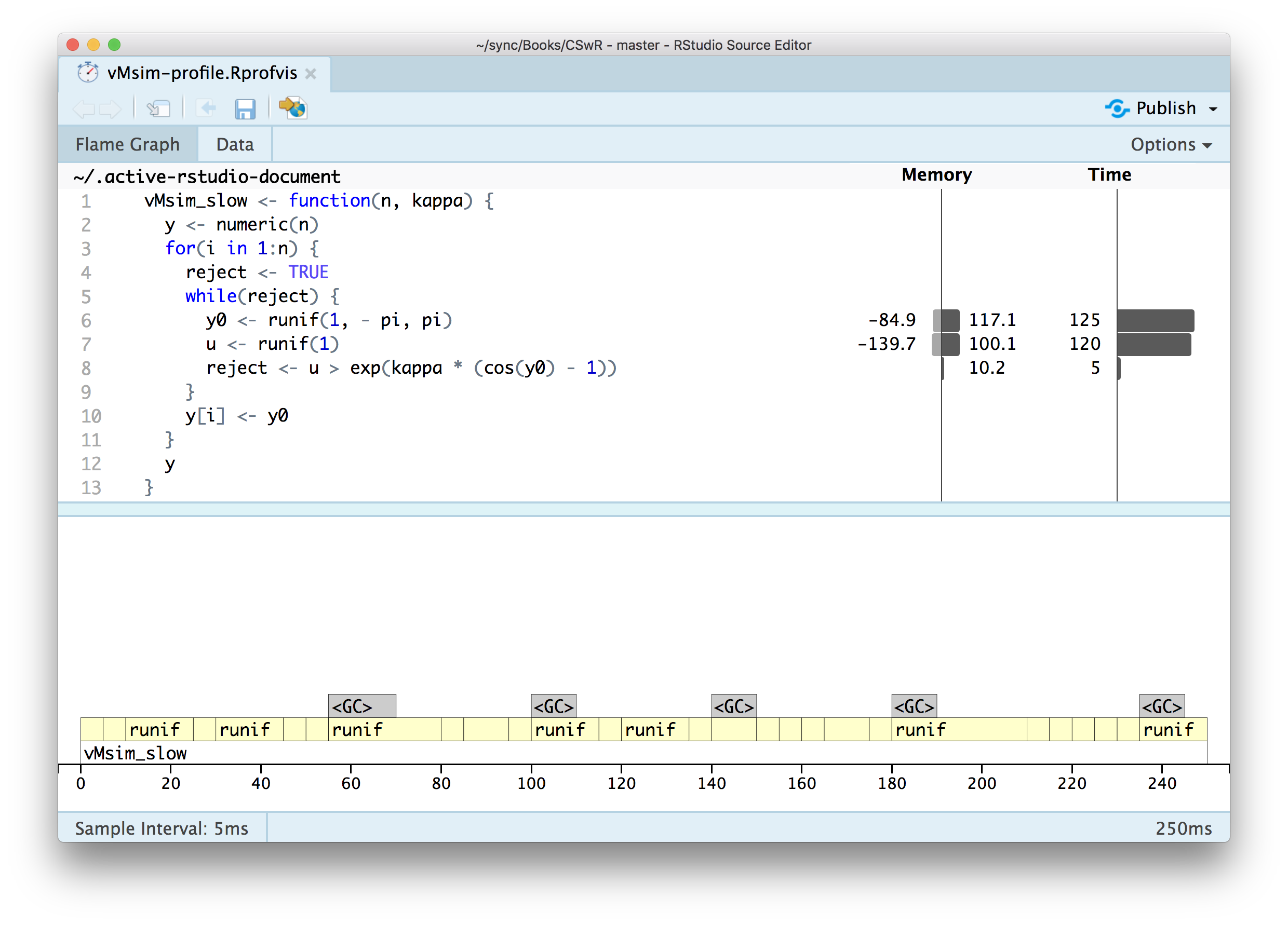 The profiling result shows that almost all the time is spent on simulating uniformly distributed random variables. It is, perhaps, expected that this should take some time, but that it takes so much more time than computing the ratio, say, used for the rejection test is a bit surprising. What might be even more surprising is the large amount of memory allocation and deallocation associated with the simulation of the variables.

The culprit is runif that has some overhead associated with each call. The function performs much better if called once to return a vector than if called repeatedly as above to return just single numbers. We could rewrite the rejection sampler to make better use of runif, but it would make the code a bit more complicated because we don’t know upfront how many uniform variables we need. This will introduce some bookkeeping that it is possible to abstract away from the implementation of any rejection sampler. Therefore we implement a generic wrapper of the random number generator that will cache a suitable amount of random variables. This function will take care of some bookkeeping and variables can then be extracted as needed. This also nicely illustrates the use of a function factory.

The implementation above is a function that returns a function. The returned function, next_rn comes with its own environment, where it stores the cached variables and extracts and returns one variable whenever called. It generates a new vector of random variables whenever it “runs out”. The first time it does so, the function estimates a factor of how many variables is needed in total based on the argument r, and then it generates the estimated number of variables needed. This may be repeated a couple of times.

We can then reimplement vMsim using rng_stream. For later usage we add the possibility of printing out some tracing information.

We should, of course, remember to test that the new implementation still generates variables from the von Mises distribution. 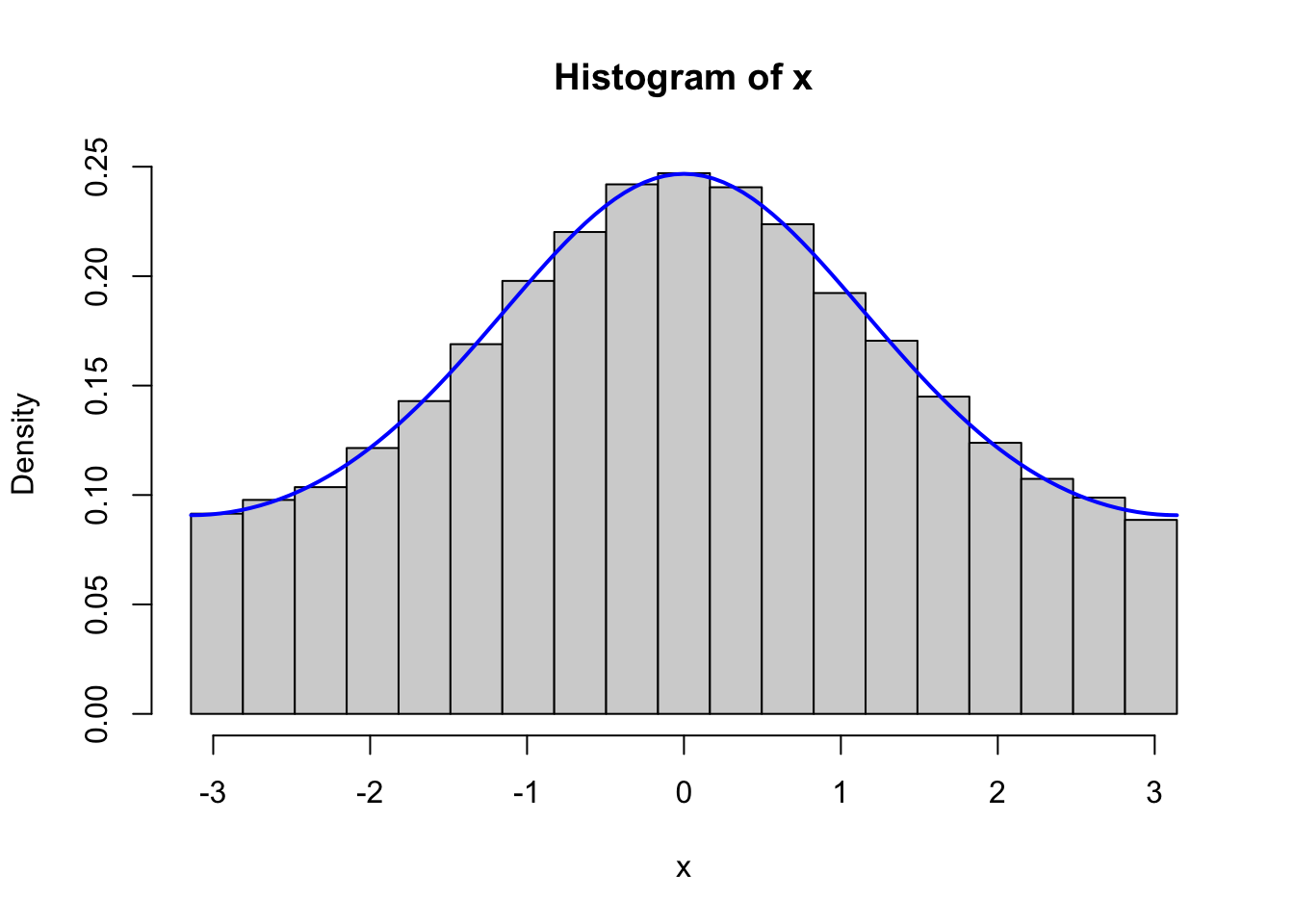 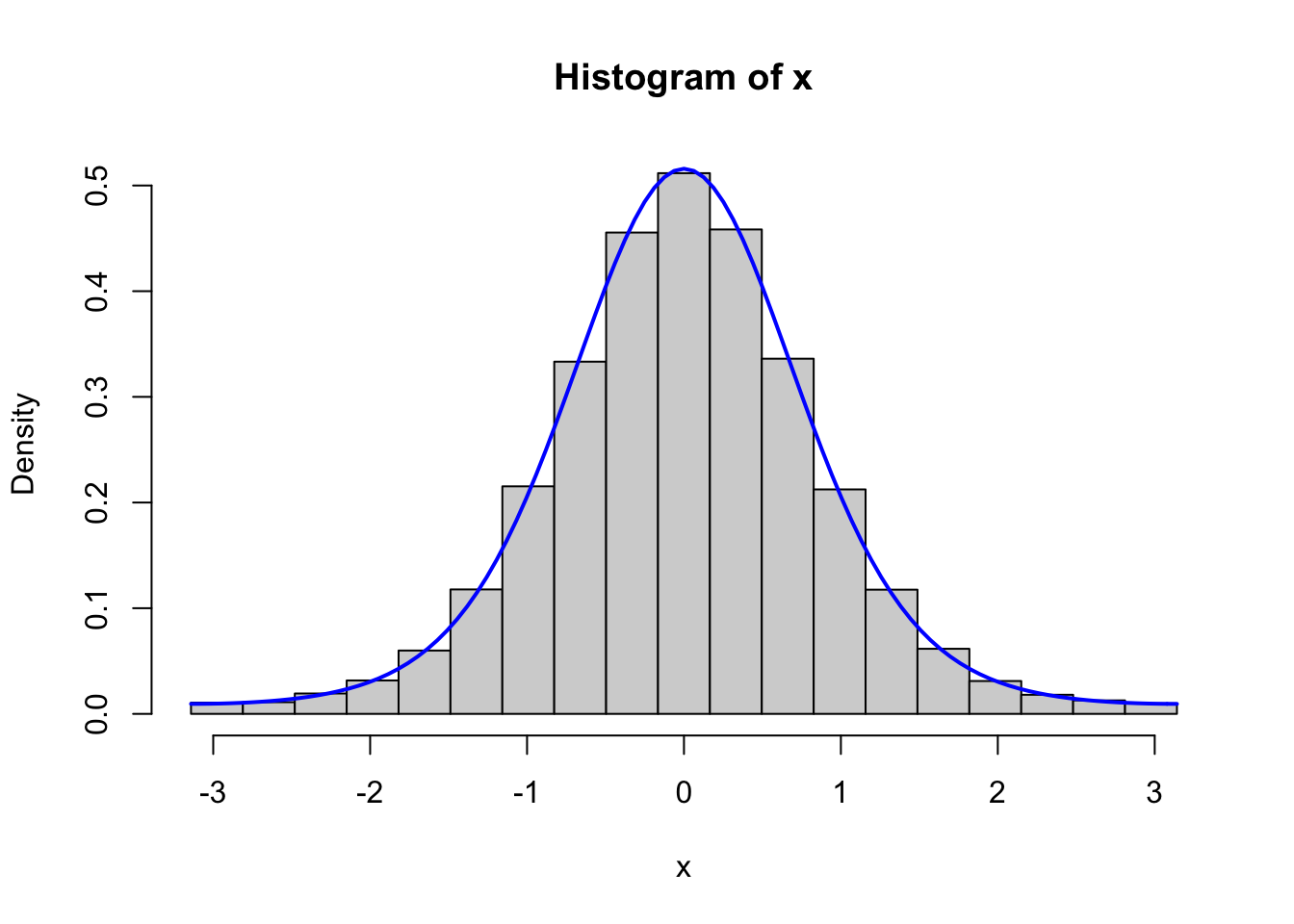 As we see from the time estimate above, using a vectorized call of runif reduces the run time by a factor 4-5. It is possible to get a further factor 2-3 run time improvement (not shown) by implementing the computations done by rng_stream directly inside vMsim. However, we prioritize here to have modular code so that we can reuse rng_stream for other rejection samplers without repeating code. A pure R implementation based on a loop will never be able to compete with a C++ implementation anyway when the accept-reject step is such a simple computation.

In fact, to write a pure R function that is run time efficient, we need to turn the entire rejection sampler into a vectorized computation. That is, it is not just the generation of random numbers that need to be vectorized. There is no way around some form of loop as we don’t known upfront how many rejections there will be. We can, however, benefit from the ideas in rng_stream on how to estimate the fraction of acceptances from a first round, which can be used for subsequent simulations. This is done in the following fully vectorized R implementation.

The implementation above incrementally grows a list, whose entries contain vectors of accepted samples. It is usually not advisable to dynamically grow objects (vectors or list), as this will lead to a lot of memory allocation, copying and deallocation. Thus it is better to initialize a vector of the correct size upfront. In this particular case the list will only contain few entries, and it is inconsequential that it is grown dynamically.

Finally, a C++ implementation via Rcpp is given below where the random variables are then again generated one at a time via the C-interface to R’s random number generators. There is no (substantial) overhead of doing so in C++. 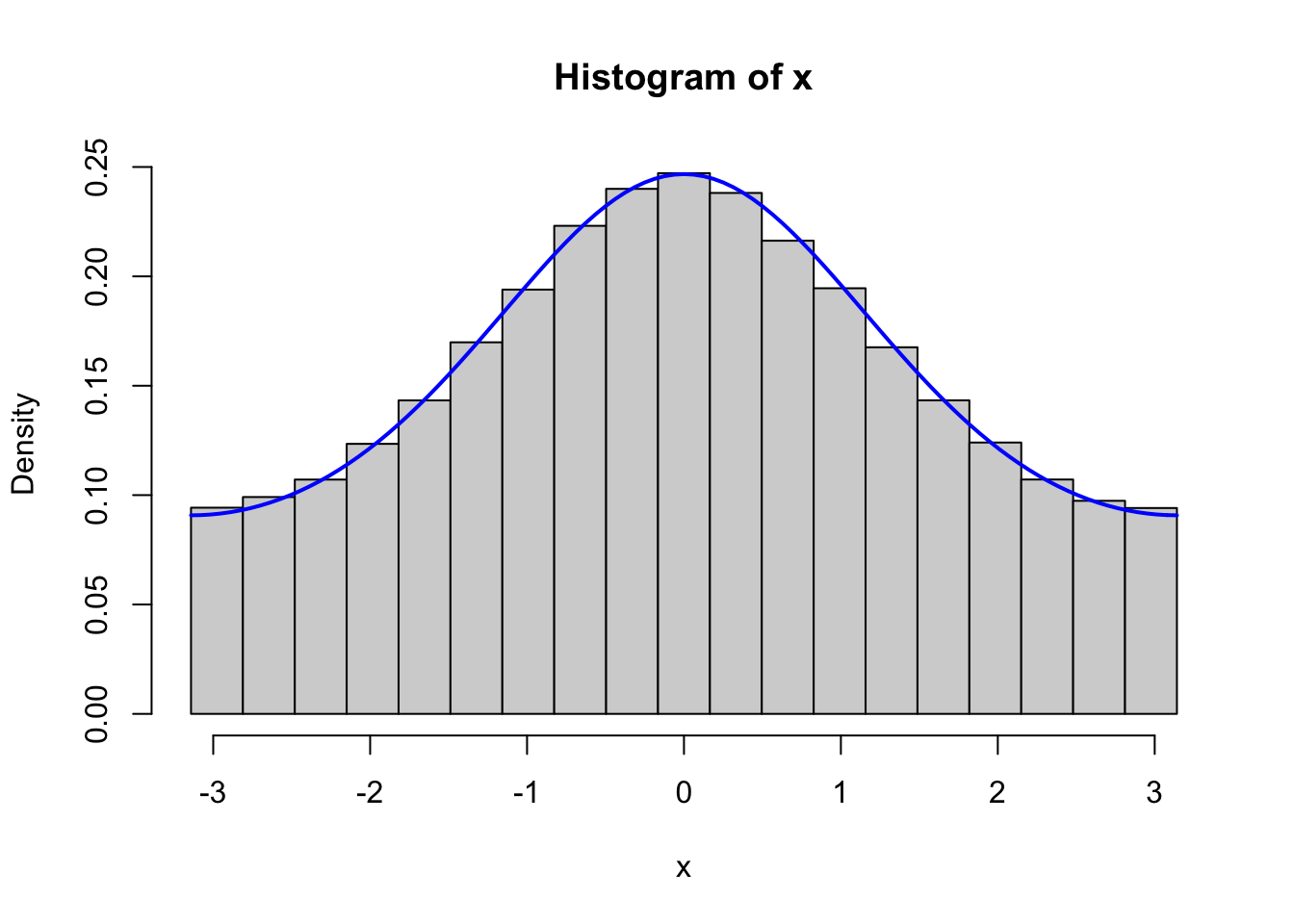 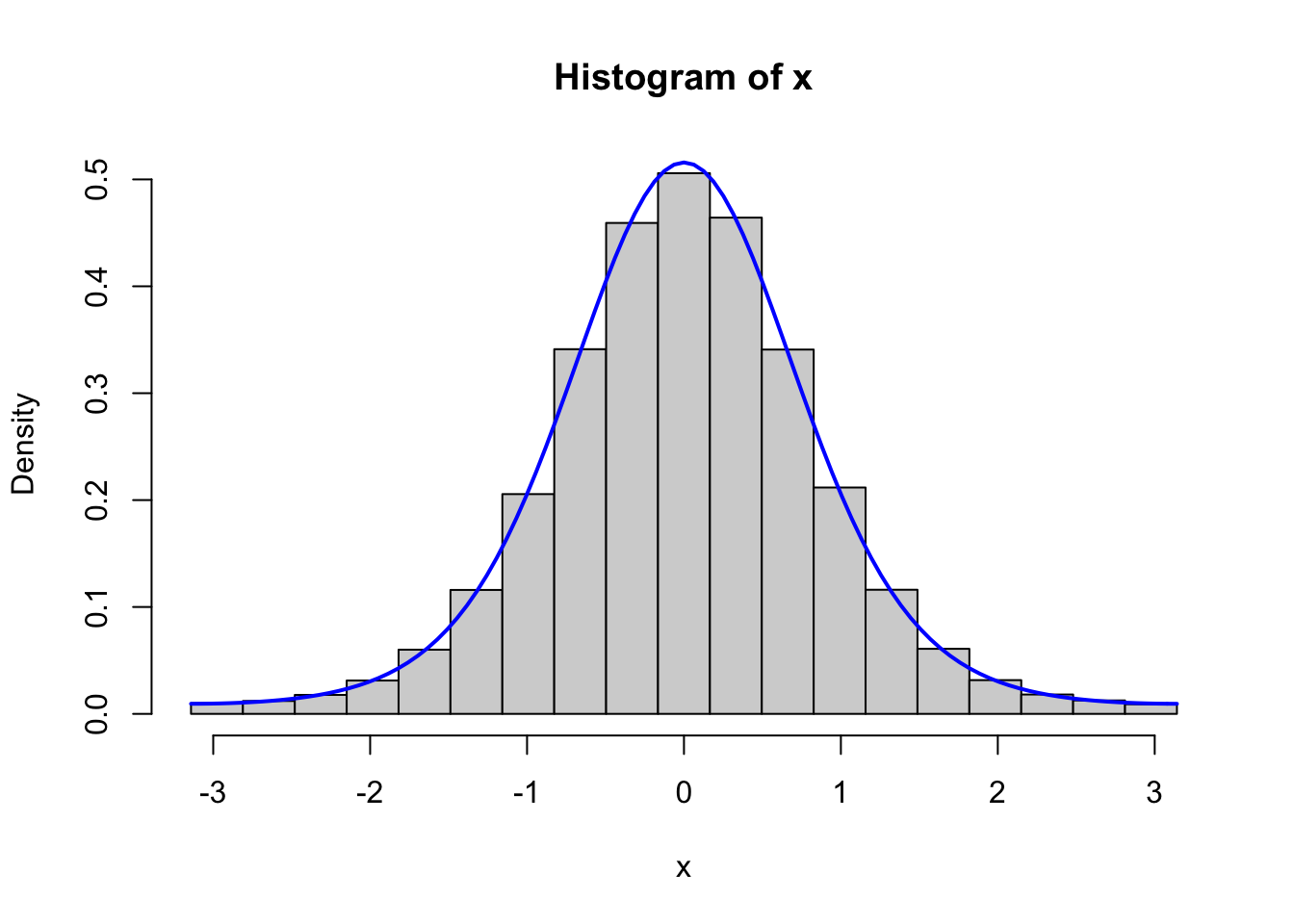 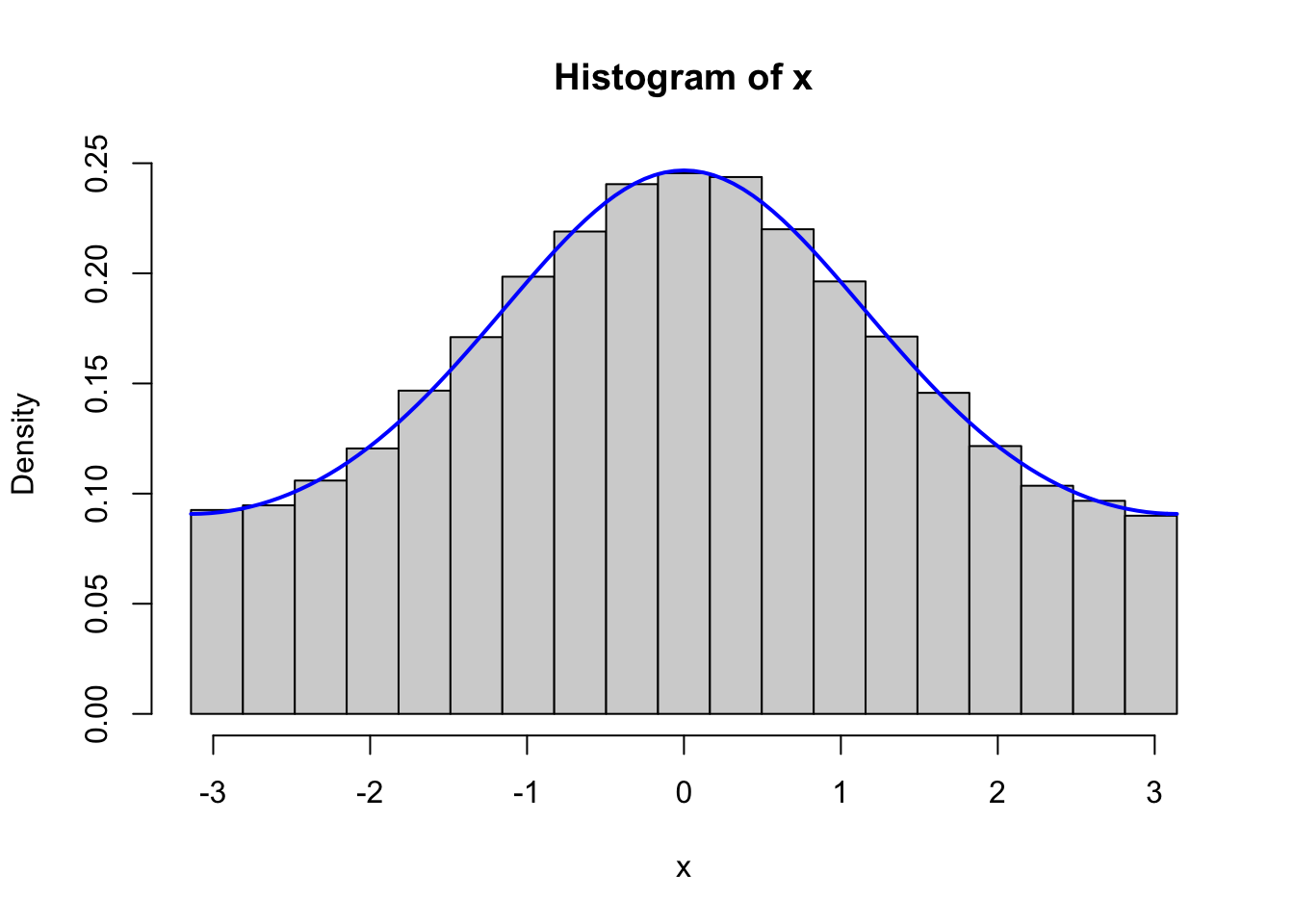 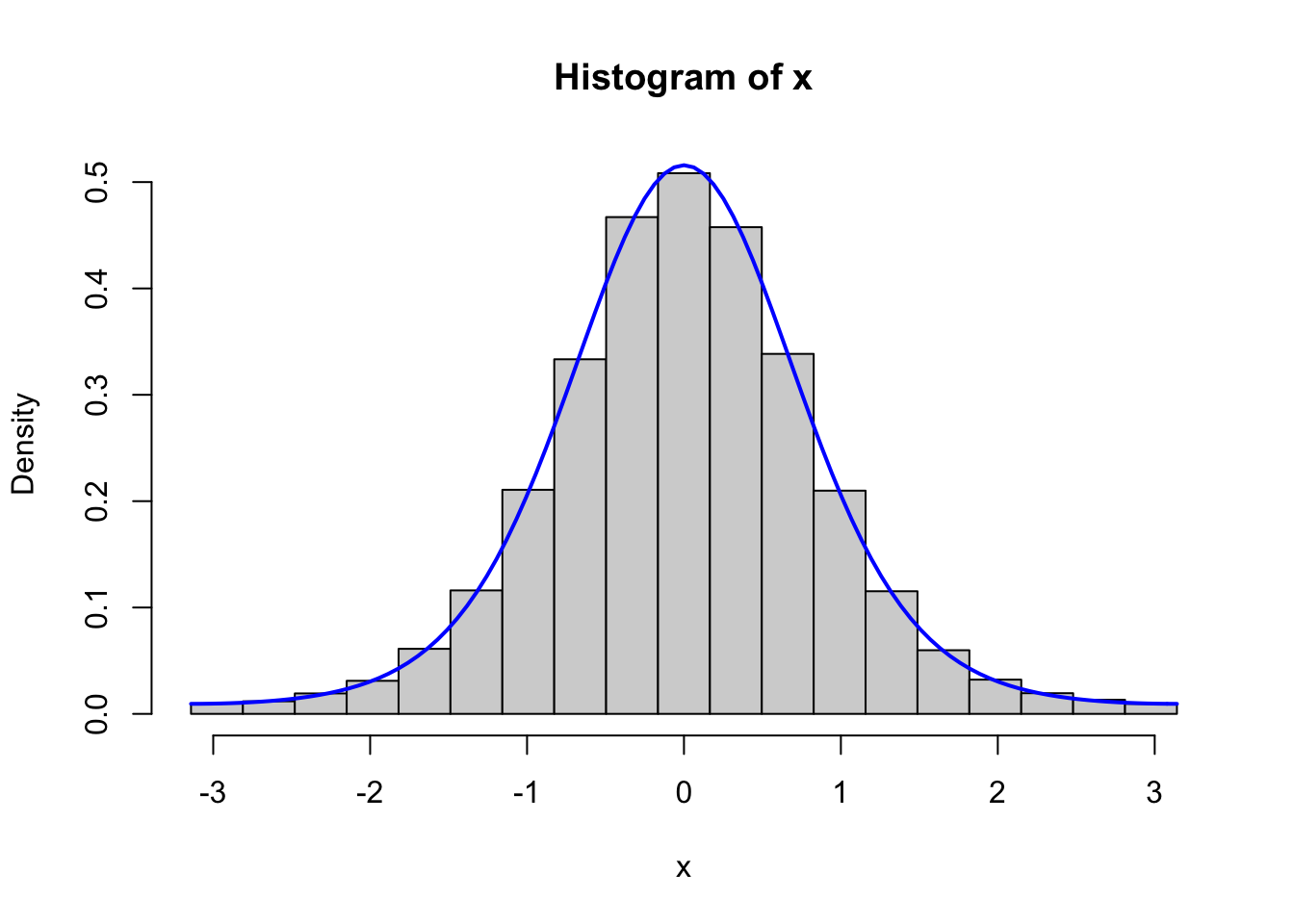 The proof of this follows from a simple univariate density transformation theorem, but see also the original paper Marsaglia and Tsang (2000) that proposed the rejection sampler discussed in this section. The density \(f\) will be the target density for a rejection sampler.

We test the implementation by simulating \(100,000\) values with parameters \(r = 8\) as well as \(r = 1\) and compare the resulting histograms to the respective theoretical densities. 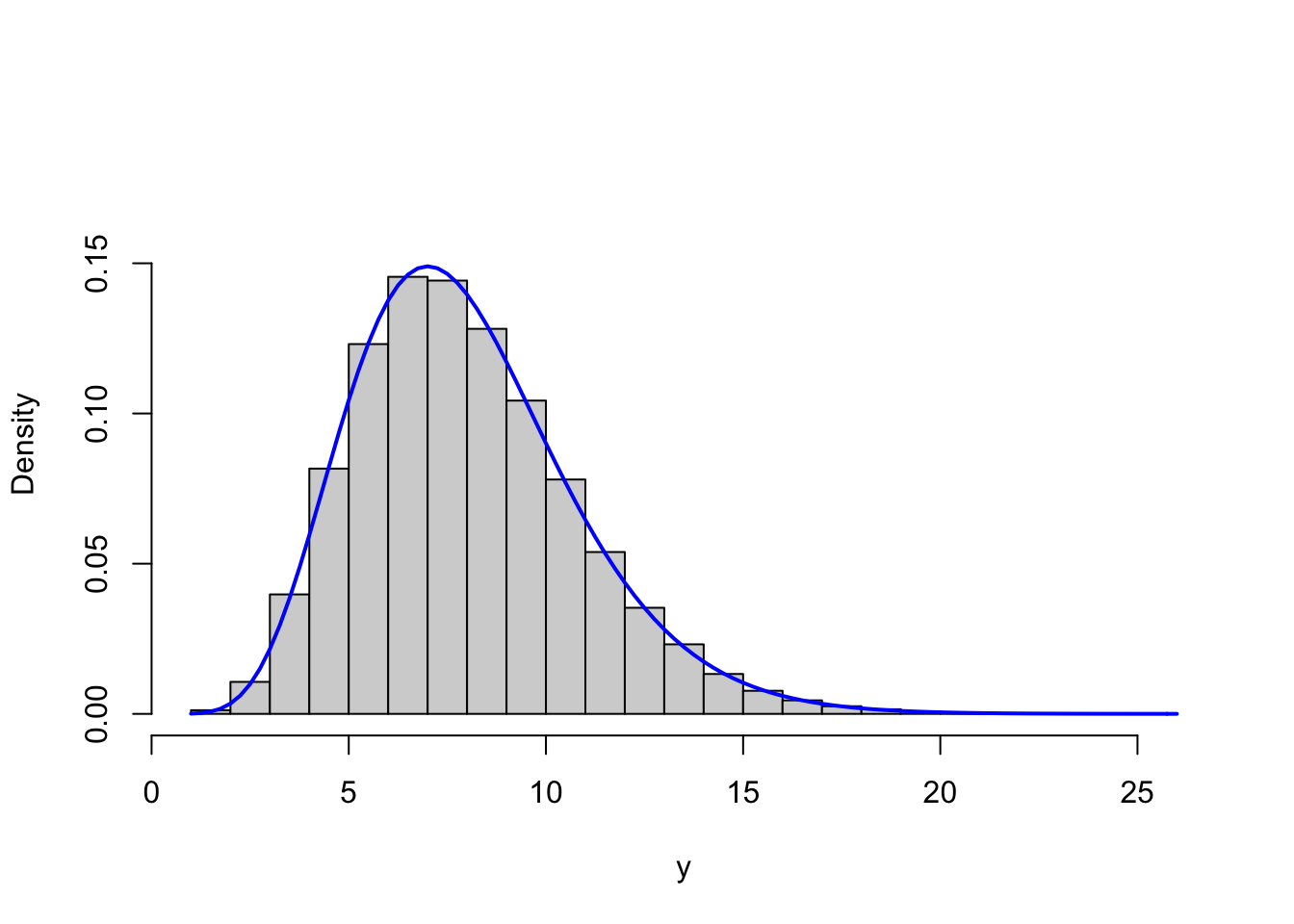 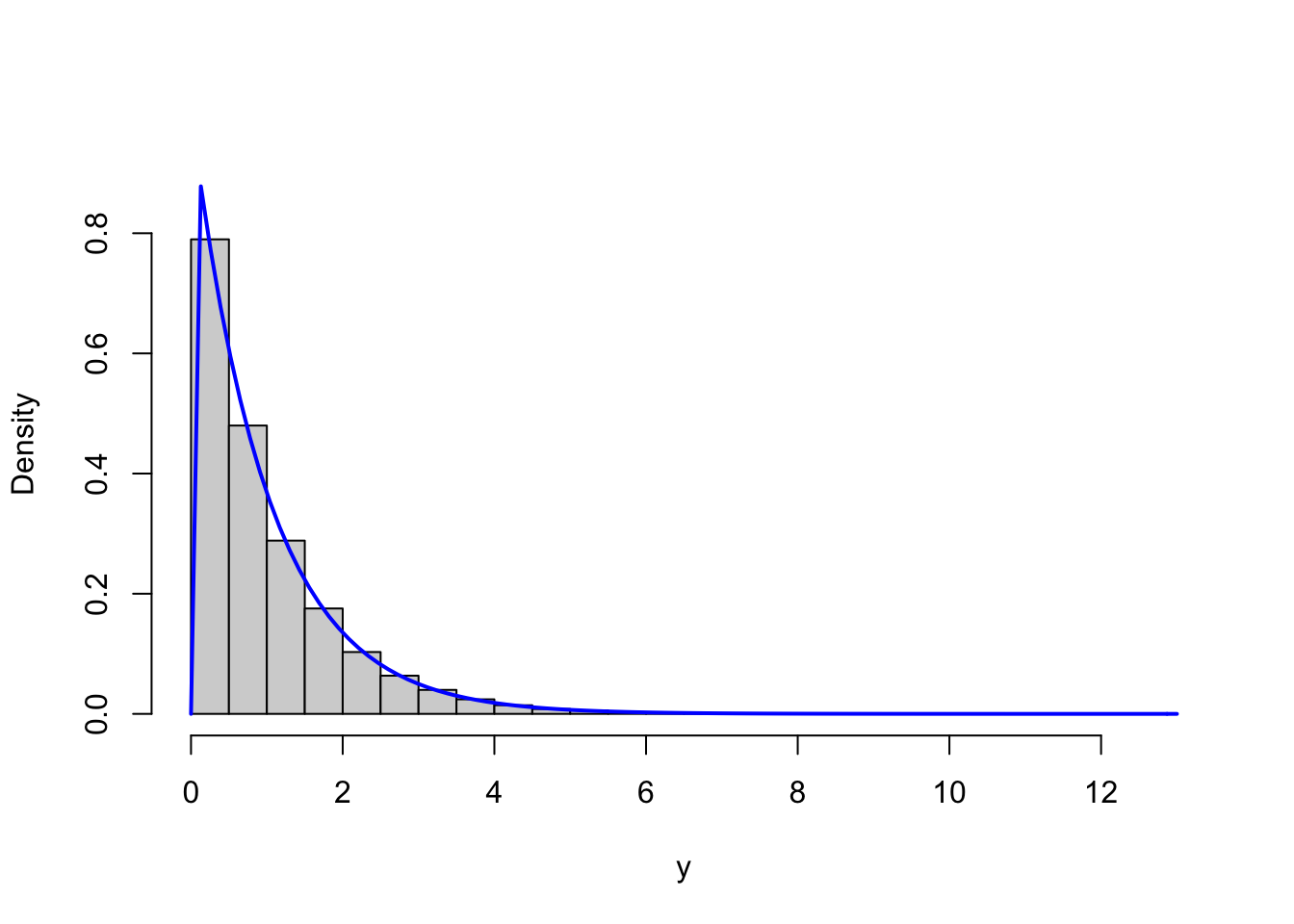 Though this is only a simple and informal test, it indicates that the implementation correctly simulates from the gamma distribution.

A visual comparison of \(q\) to the (unnormalized) Gaussian density also shows that the two (unnormalized) densities are very close except in the tails where there is very little probability mass.

Figure 4.5: Comparisons of the Gaussian proposal (red) and the target density (blue) used for eventually simulating gamma distributed variables via a transformation.