One strategy for choosing \(\gamma\) is to minimize the univariate function \[\gamma \mapsto H(\theta_0 + \gamma \rho_0),\] which is an example of a line search method. Such a minimization would give the maximal possible descent in the direction \(\rho_0\), and as we have argued, if \(\rho_0\) is a descent direction, a minimizer \(\gamma > 0\) guarantees descent of \(H\). However, unless the minimization can be done analytically it is often computationally too expensive. Less will also do, and as shown in Example 7.1, if the Hessian has uniformly bounded numerical radius it is possible to fix one (sufficiently small) step length that will guarantee descent.

Using backtracking, we can actually dispense of the curvature condition and simply check the sufficient descent condition

The GD() function takes the starting point, \(\theta_0\), the objective function, \(H\), and its gradient, \(\nabla H\), as arguments. The four parameters \(d\), \(c\), \(\gamma_0\) and \(\varepsilon\) that control the algorithm can also be specified as additional arguments, but are given some reasonable default values. The implementation uses the squared norm of the gradient as a stopping criterion, but it also has a maximal number of iterations as a safeguard. Note that if the maximal number is reached, a warning is printed.

Finally, we include a callback argument (the cb argument). If a function is passed to this argument, it will be evaluated in each iteration of the algorithm. This gives us the possibility of logging or printing values of variables during evaluation, which can be highly useful for understanding the inner workings of the algorithm. Monitoring or logging intermediate values during the evaluation of code is referred to as tracing.

We will use the Poisson regression example to illustrate the use of gradient descent and other optimization algorithms, and we need to implement functions in R for computing the negative log-likelihood and its gradient.

The implementation below uses a function factory to produce a list containing a parameter vector, the negative log-likelihood function and its gradient. We anticipate that for the Newton algorithm in Section 7.3 we also need an implementation of the Hessian, which is thus included here as well.

We choose to normalize the log-likelihood by the number of observations \(n\) (the number of rows in the model matrix). This does have a small computational cost, but the resulting numerical values become less dependent upon \(n\), which makes it easier to choose sensible default values of various parameters for the numerical optimization algorithms. Gradient descent is very slow for the large Poisson model with individual store effects, so we consider only the simple model with two parameters.

The gradient descent implementation is tested by comparing the minimizer to the estimated parameters as computed by glm().

We get the same result up to the first two decimals. The convergence criterion on our gradient descent algorithm was quite loose (\(\varepsilon = 10^{-4}\), which means that the norm of the gradient is smaller than \(10^{-2}\) when the algorithm stops). This choice of \(\varepsilon\) in combination with \(\gamma_0 = 0.01\) implies that the algorithm stops when the gradient is so small that the changes are at most of norm \(10^{-4}\).

We use the tracer object with our gradient descent implementation and print trace information every 50th iteration.

Figure 7.1: Gradient norm (left) and value of the negative log-likelihood (right) above the limit value \(H(\theta_{\infty})\). The straight line is fitted to the data points except the first ten using least squares, and the rate is computed from this estimate and reported per ms. 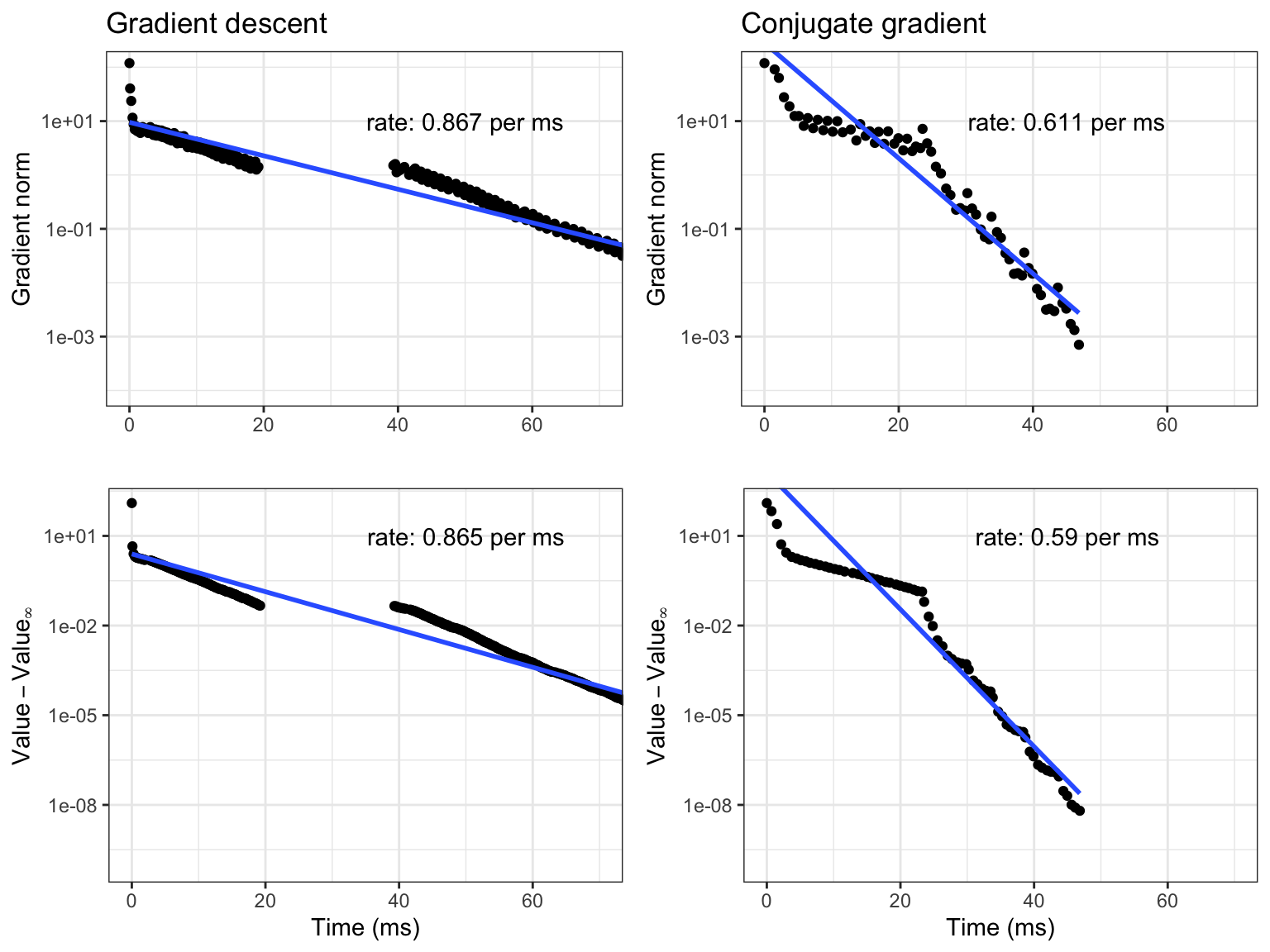 This algorithm is fast enough to fit the large Poisson regression model.

The Jacobian needs to be implemented for the specific example of peppered moths.

We can then use the conjugate gradient algorithm to compute the maximum-likelihood estimate.

The peppered Moth example is very simple. The log-likelihood can easily be computed, and we used this problem to illustrate ways of implementing a likelihood in R and how to use optim to maximize it.

If we do not implement a gradient, a numerical gradient is used by optim(). This can result in a slower algorithm than if the gradient is implemented, but more seriously, in can result in convergence problems. This is because there is a subtle tradeoff between numerical accuracy and accuracy of the finite difference approximation used to approximate the gradient. We did not experience convergence problems in the example above, but one way to remedy such problems is to set the parscale or fnscale entries in the control list argument to optim().